The Alex Rovello Memorial Foundation was founded in 2013 with the hope of establishing a fitting tribute to Alex Rovello, a talented Portland tennis player who was attending the University of Oregon until he suffered a tragic accident in May 2013. 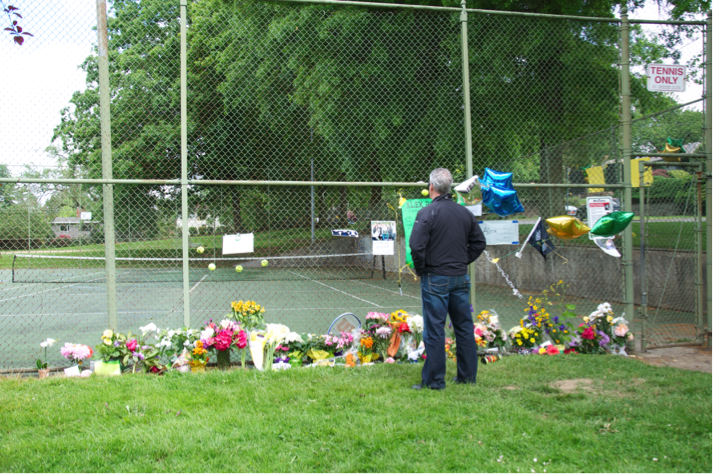 We initially began this project to refurbish the tennis courts at Berkeley Park.  Alex began playing on these courts when he was two years old and continued to practice there with his Cleveland High School tennis team.  Our fund works to provide other children and families with similar opportunities to play and grow together in their own neighborhood. 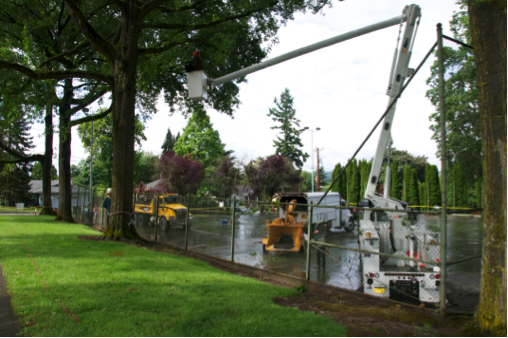 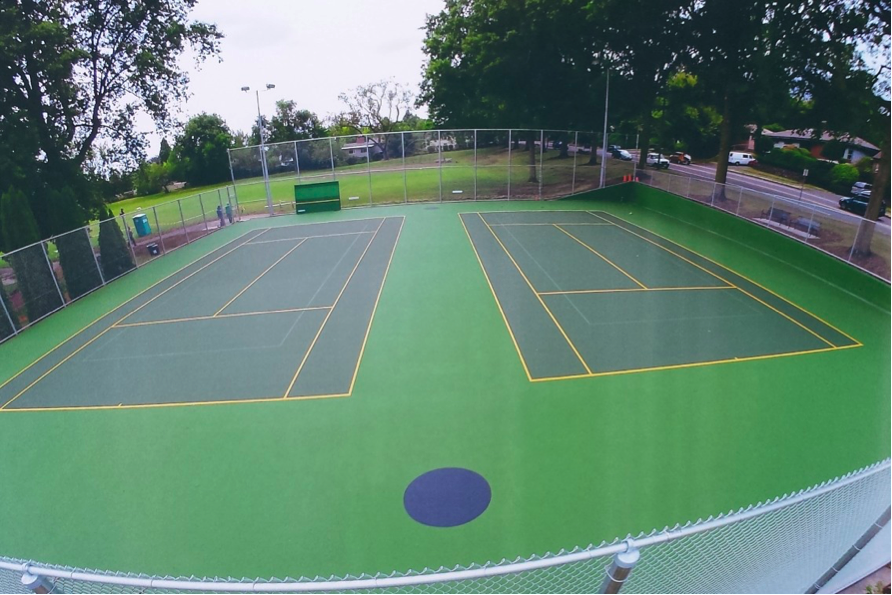 Alex Rovello had played tennis at Berkeley Park, four blocks from home, since the age of two.  This park had two well-loved by neglected courts.  On May 11th, 2013, Jim and Geri Rovello lost their beautiful son in a diving accident.  We decided on May 13th to create the Alex Rovello Memorial Fund to renovate Berkeley Park’s courts.  Through this renovation we hoped to create a fitting tribute to Alex, and to provide other children and families with similar opportunities to play and grow together in their neighborhood.

May 16, 2014 The Portland Tribune
Alex Rovello won friends and matches 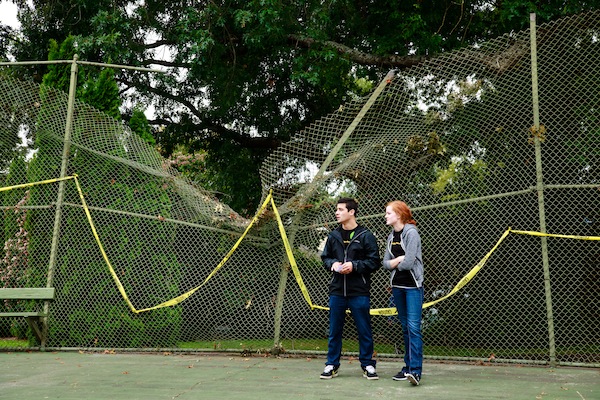 On September 15, 2013, the public was invited to an afternoon of fun, tennis, and remembrances of Alex at Berkeley Park in Southeast Portland.  Jim and Geri Rovello hosted the Kick-off to raise awareness and funding for the Alex Rovello Memorial Project. There was an overwhelming show of support, compassion, and love from the hundreds who attended.  The work we wanted to accomplish on the Berkeley courts included resurfacing the courts; trimming trees; replacing fencing; fixing the retaining wall; installing new nets, posts, and benches; adding electricity; and making the courts ADA-compliant.  That day, we raised over $50,000 towards renovations, though we still needed to make $175,000 to make the renovations a reality.

Center court on the north side of the Student Tennis Center at the University of Oregon was named in Alex Rovello’s honor during the dedication ceremony November 9th.  It was dedicated not just out of respect for his enormous athletic success (60 singles wins and 53 doubles wins in three seasons), but because the athletic department felt the great loss of a universally liked student athlete.  Alex gained friends from all athletic programs at the university and was a positive influence on everyone who interacted with him.  In his three years at U of O, Alex played all but one of his career indoor matches on the newly named Alex Rovello Court.  With a tremendous outpouring of support, those in attendance recalled their favorite memories with Alex and honored the lasting legacy he left behind.

The United States Tennis Association (USTA) announced that it had awarded a $20,000 grant to the Alex Rovello Memorial fund.  This generous grant was made in addition to the technical reviews that the USTA provided in July 2013.  From the initial days of the Alex Rovello Memorial Project, they provided assistance with reviewing contractor bids, onsite engineering visits, and technical recommendations.  These technical reviews established credibility as we went forward to gain endorsement from the Portland Parks & Recreation Department, along with the Eastmoreland and Woodstock Neighborhood Association.

The USTA recognized a community that valued tennis and that wanted to remember a young man who left us far too early.  Alex would be thrilled to know that the USTA was one of the first organizations to step forward to fund his memorial.  The USTA junior and collegiate programs gave Alex the opportunity to embrace the support of tennis and provided venues that created lasting memories.

During halftime at the final home Cleveland High School varsity basketball game, Alex was inducted into the Mel Krause Cleveland High School Athletic Hall of Fame, along with Thomas Cameron, Charles Cleek, and Phillip Smith.  Alex held 4 state tennis singles titles and was part of the 5A State Tennis team while at CHS.  The 2010 Boys State Tennis Team title is the first state athleic team honor for Cleveland High School.  A short biography of Alex’s athletic achievements throughout his high school and college career can be found at the link below.

The Osborne family has a strong tennis and Portland community connection.  F. Edward and Jeanne both enjoyed the game of tennis, and we believe they would be proud to honor a fellow tennis player and to create a community gathering place.  At this point, we were so grateful to the over 1,100 individuals and families who had contributed to Alex’s Memorial Fund to date.  Because of their generosity and the generosity of the Osborne Family Foundation, we were able to begin planning our renovations for the spring of 2014. 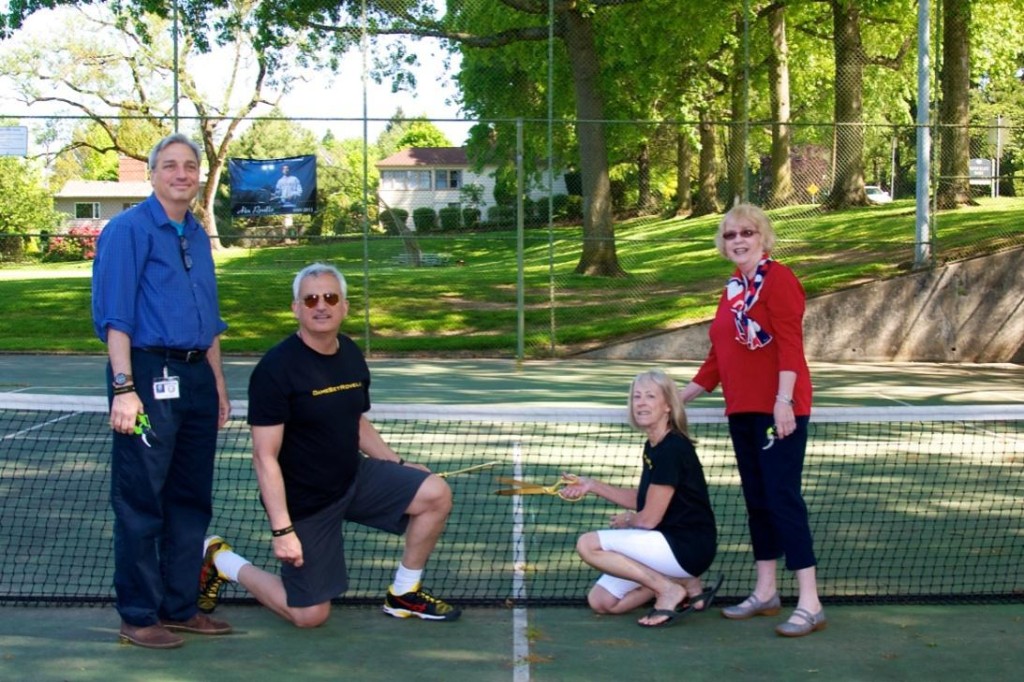 Jim and Geri Rovello celebrated quietly with friends and family as construction began on the Berkeley Park Tennis Court Renovation Project.  We had successfully raised $175,000 for the Alex Rovello Memorial Fund, which would pay for complete renovation for the tennis courts.  Elaine Harper and Mike Rosen, the original support team for the Rovello’s and the Project, were also present. 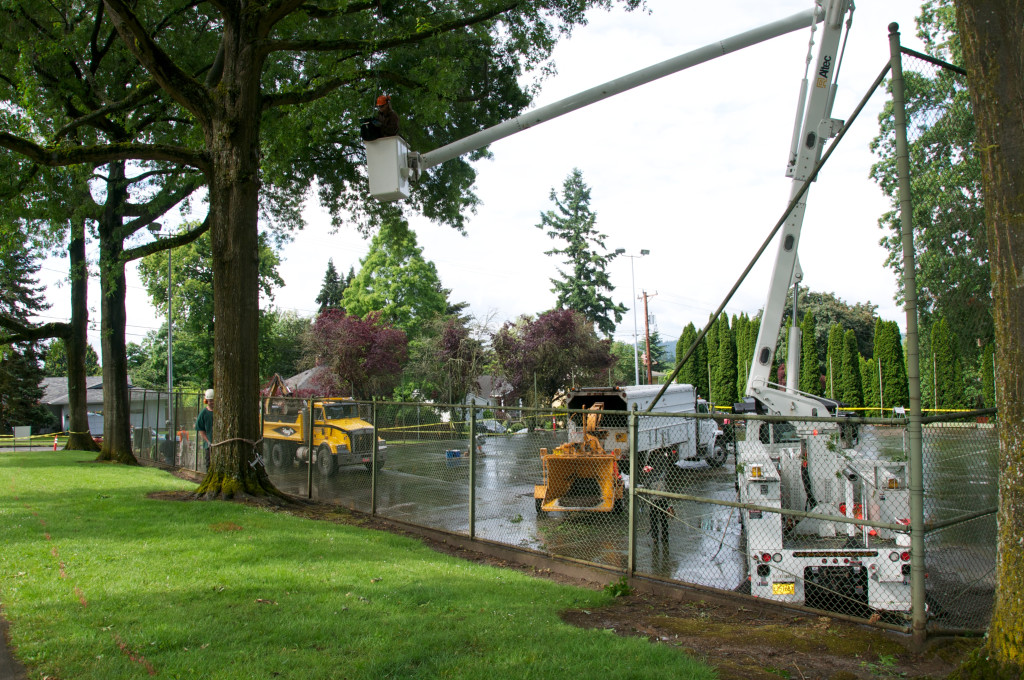 Once the project began, the city, contractors, and vendors provided unexpected donations to our project.  Concrete Construction Company poured out concrete and donated the pad on which the two benches are placed under the trees. Portland Road and Driveway did the court surface and asphalt work, providing over $4,000 of in-kind donations. The Portland Parks Department provided the services of engineer Lisa Cameli for project oversight.

Renegade Sports Surfacing, Inc. were the general contractors and provided over $10,000 of in-kind donations to the project along with their surface vendor, Deco Turf, which donated the court paint. The courts were painted Cleveland High School colors of green and yellow, and Distinct Signage Group donated the stencil “AR,” which echoed the embroidered patch that University of Oregon athletes wore on their uniforms to commemorate Alex last spring. 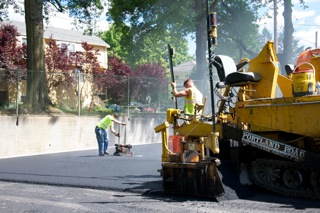 Benches, planters, and trash receptacles were made possible with over $3,000 of in-kind donations from Precision Recreation Contractors, NW Playground, and Wildwood Playground NW.  Portland Parks & Recreation provided the fountain, picnic table, flower gardens and Alex Rovello Memorial Tennis Courts signage under the Berkeley Park Sign. BC Laserworks provided the signage at cost on the east fence.

Project Tennis Backboard donated the backboard placed on the north fence. They are a non-profit organization headed by the Hawaii Tennis Council, based in Kailua Kona, Hawaii. Cheryl Shrum, Project Tennis Backboard’s Project Coordinator, was a graduate of U of O and wanted to provide a way to introduce new and continuing players to the game of tennis and to honor Alex. 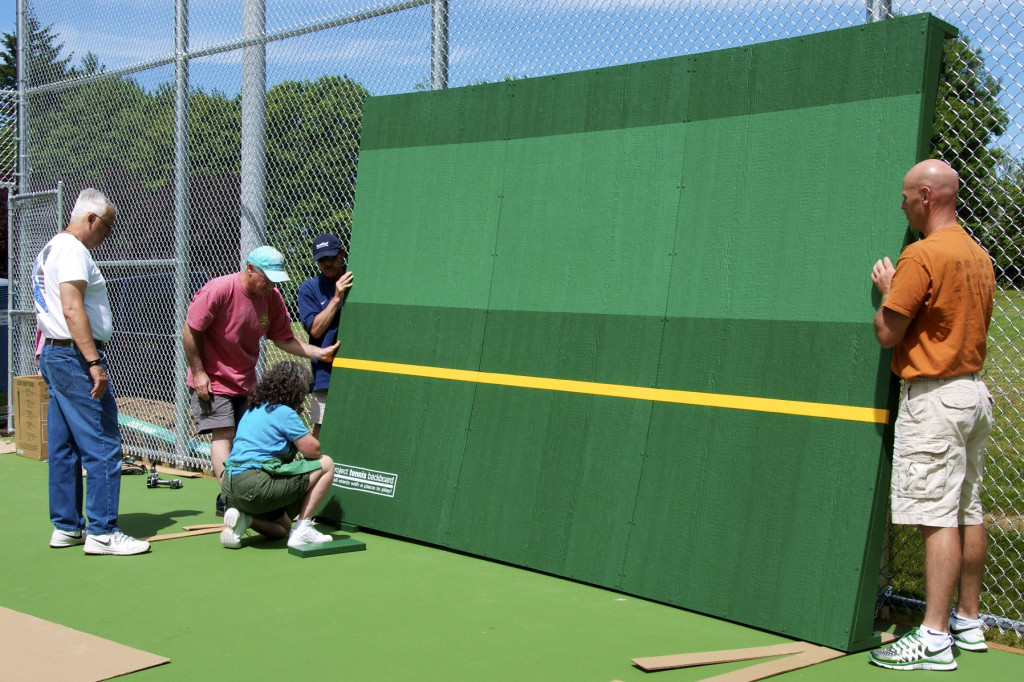 Joan Hallquist from Portland Parks designed the memorial signage, which is placed on the viewing area outside of the courts. Cindy Chace wrote the endearing chronicle of Alex’s connection to Berkeley Park.

Abra Kazam hung the very first banner at Berkeley Park tennis courts, signifying this was a special place of Alex’s. It began with a portrait drawn by Andrew MacKenzie-Noice. From that initial gesture, flowers appeared daily from friends and family, yet another uplifting signal from the community that had provided the inspiration to begin this renovation project.  Throughout the year, Vicki and Elmer MacKenzie-Noice from Abra Kazam worked tirelessly on creating and producing banners and apparel.  All of the apparel was donated at cost with profits going into the Alex Rovello Memorial Fund. 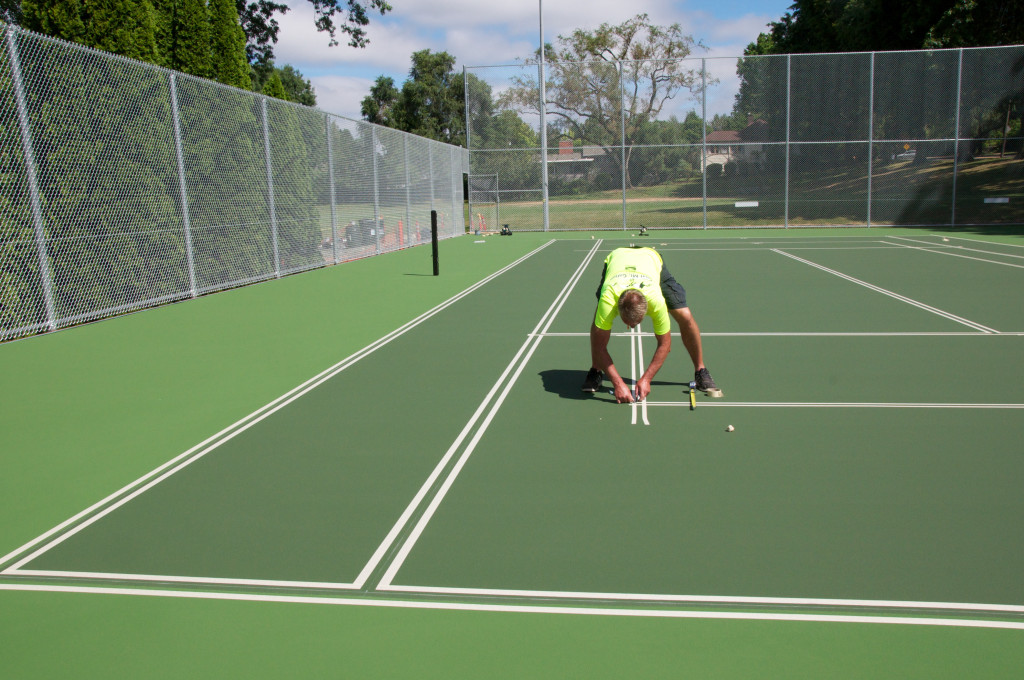 The Alex Rovello Memorial Courts began at a kitchen meeting with Mike Rosen, father of Alex’s Cleveland High School teammate Elias Rosen, and family friend Elaine Harper on May 24, 2013 at the Rovello’s house.  Mike provided the inspiration to dream big on this memorial and Elaine provided the fundraising knowledge to make this project possible.  Their heartfelt compassion and diligence helped create this memorial to Alex.

City Commissioner Amanda Fritz and Parks Director Michael Abbate presented Jim and Geri Rovello with an endorsement letter naming the courts in Alex’s honor. It was with the generosity of nearly 1,400 community members and families, as well as generous grants from local businesses and foundations, that we managed to renovate the Alex Rovello Memorial Courts. 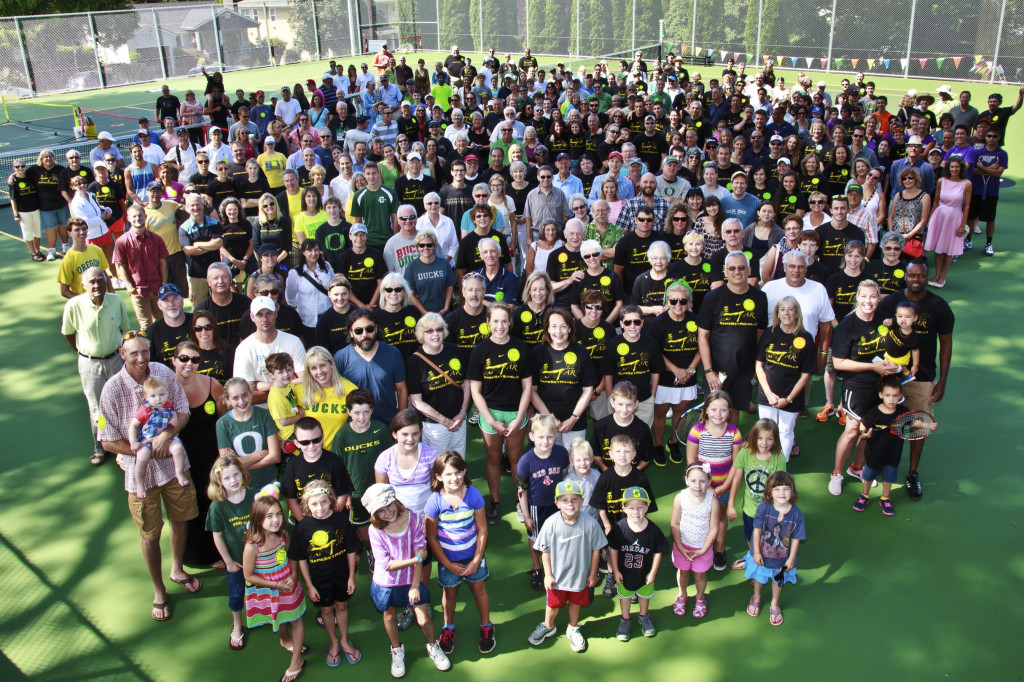 Jim Rovello hit the first serve on the memory-filled courts.  Christening of the courts continued throughout the day with former teammates and friends of Alex.  Food provided by Otto’s Sausage Kitchen, music, and family activities made this a joyful community celebration.

Alex had begun playing on these courts when he was two years old, continuing on to practice there with his Cleveland High School tennis team. He went on to win four state titles and his most proud moment was being part of the 2010 Cleveland High School – Boys 5A State Tennis Team. This was the first athletic team title for Cleveland. Alex went on to play for the University of Oregon, the collegiate team of his dreams, from 2010 to 2014.

Alex was inducted into the Portland Interscholastic League  (PIL) Sports Hall of fame, a non-profit which supports high school athletic programs and recognizes academic and athletic achievement in school sports.  Alex was the youngest inductee this year, though the strength of his sportsmanship, his athletic talent, and the momentum and drive that he had to participate in the sport that he loved was worth recognizing in this beautiful ceremony, along with so many other successful athletes.