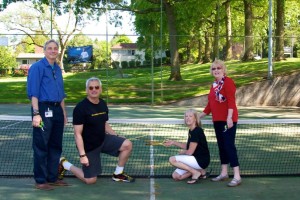 Portland, Ore.—Geri and Jim Rovello celebrated quietly with friends and family last week as construction began on the Berkeley Park Tennis Court Renovation Project. The family successfully raised $175,000 for the Alex Rovello Memorial Fund, which will pay for complete renovation of the tennis courts at Berkeley Park, the Portland Parks & Recreation park where their son, University of Oregon and Cleveland High School tennis star, Alex Rovello learned to play tennis from the age of two. Rovello’s parents have been working the past year to raise funds to renovate the Berkeley Park tennis courts as a memorial to Alex and in partnership with Portland Parks & Recreation.

“Mother’s Day earlier this month marked the one-year anniversary of Alex’s death,” Geri Rovello said. “Our loss is insurmountable but on that day we tried to focus on the many positives we have in our present lives.”

“Thanks to the overwhelming support of the community, the family and friends of Alex Rovello are proud to announce the start of Phase One renovations at Berkeley Park Tennis Courts. With the funding of Phase One complete, we are looking to secure funding of Phase Two. The goal for Phase Two is to raise another $40,000 to create a welcoming space alongside the courts in addition to other outside court improvements—currently $15,000 is in hand. This space will recognize Alex’s accomplishments as a person and an athlete. The area will also serve to inspire the community’s connection to the sport of tennis,” Geri Rovello added.

“We are able to start the construction now thanks to the generous support of the F. Edward and Jeanne Osborne Family Foundation, United States Tennis Association, Mark and Kelly Ruff Family, The Eileen Ruff Family, The Peter Pope Family, David and Diane Helm Family, Kinsman Foundation, Portland Parks Foundation and more than 1,336 individuals and families in the community.

“This could never have happened without our partnership with Portland Parks & Recreation and the Commerce-Cleveland High School Alumni Association who have lent their support since the initial planning began a year ago,” Rovello said.

Phase Two highlights include a viewing area, including benches, planters, memorial kiosk and signage, landscaping and a trash receptacle; replacing the concrete pad for a water fountain; installing a trench drain next to ADA accessible entrance and a French drain outside of the court on the north side; and a fund to provide activities and events to promote tennis. Concrete pads and benches will also be placed under the trees on the S. E. Cesar Chavez side for viewing.

To formally open the courts, Sunday, July 27, 2014 (time TBA), the family is planning a dedication at the tennis courts at Berkeley Park, located at 3701 SE Bybee at Cesar Chavez Blvd.

Interested donors can contribute at the donation page found at www.alexrovellomemorial.org